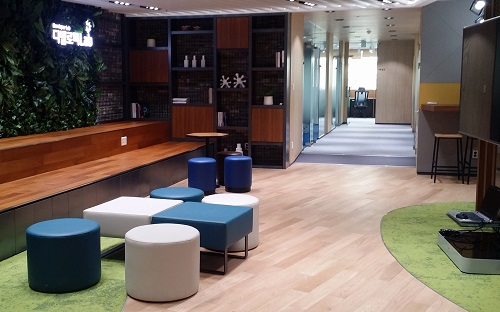 “When I go to introduce the company, I ask if there is no reference at the end. Asking a reference to the startup itself is awkward.”

This is a representative from a fintech company representative who participates in the Woori Bank startup cooperation program ‘DinoLab’, which opened in Yeouido, Seoul on the 3rd. DinoLab is a ‘Developer Lab’ that opens up Woori Bank’s mobile banking service (WiBbank) as a testbed, not just providing office space to fintech companies.

Woori Bank selected 10 Fintech companies as one developer lab such as May Eye, Blueprint Lab, Hidden Track, Mosaic, T-Wear, InfoSonic, AT Soft, Systemmatic, Zero One A, Private Futures. . One development lab will receive six months of support from April to September.

Hwang, Won-chul, head of the group of Digital Financial Group, Managing Director, Woori Bank, said, “We can create a separate channel in Million-owned Wevy Bank to verify our services to our customers.” “There are no fees or conditions.

“The most difficult process for startups is to close the business at the operational stage, even before meeting customers,” he said. “Any business is not unreasonable if it gets damaged by the hands of the market. “Is it possible to pass through the Death Valley?”

Go Sung-Yeop, CEO of machine learning service company, selected as one of the developer labs, said, “Amazon Web Service has enabled us to reduce the burden on existing server costs.” Helpful. ”

Sysmatic plans to develop a service that summarizes the contents of Wobby Bank and delivers them as push alarms to customers.

Mr. Ko said, “Even if the app has more than 5 million downloads, the number of daily users is often less than 100,000 users.” “If you have a summary of your own content and send it as a push alarm, we will naturally activate it.” said.

Woori Bank plans to install services developed by startups at Woby Bank at the end of the year after testing with the tenants. Later, we plan to expand to other non-face-to-face channels operated by Woori Bank.