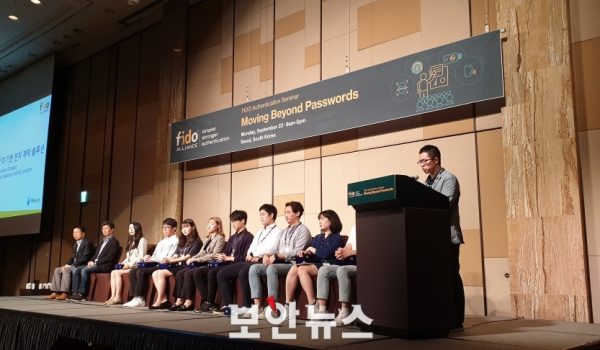 Global Certification Authority CrossCert (CEO Shin Hong-sik) was held on September 23 at the Hilton Hotel in Seoul. At the FIDO Hackathon Awards, TEEware, mentored by CrossCert, announced on the 24th that it developed the digital signature technology combining FIDO and distributed ID and won the ‘Top 3 Award for the Highest Achievement’.

The Hackathon program conducted by FIDO Korea Working Group lasted about 3 months since June. CrossCert mentored the TEEware team and the Easy team, and both teams performed well. First, TEEware team is a startup company (representative Kwak No-hyun) from KAIST, and chemically combines DID (Decentralized Identifier) ​​and FIDO (registers FIDO public key in DID ID card) to make simple electronic signature through FIDO certification on various electronic documents such as contract. I was asked to perform. Blockchain-based Decentralized Identifier (DID) identification, which is spotlighted as the next generation authentication technology, was implemented to accurately verify the signer of electronic documents, and was awarded the Top3 Award by excellent evaluation by the judges.

Han Sang-wook, the team leader of CrossCert, said, “The top three TEEware team has made the best use of the technologies of both companies, such as devising a FIDO-based multi-signature model for effective use of the FIDO Key. It was a hackathon that was more than expected, ”he said. CrossCert and TEEware signed an MOU to maintain the relationship after FIDO Hackathon and to cooperate with each other for technology and service.

During the panel discussion session, FIDO experts such as Samsung SDS, CrossCert, and BC Card participated to share the online certification trend of the Korean market. Ahn, Gun-sik, vice president of the CrossCert, who attended the panel, noticed the adoption of the FIDO Hackathon Program and Kookmin Bank’s FIDO Best Practices. Mr. Ahn Gun-sik said, “CrossCert established FIDO Global Certification Center in 2016, and has secured 550 million transactions and more than 25 million monthly FIDO transactions to various customers such as finance, public and education. In service. Through this, we are replacing passwords that are inconvenient to use and high risk of leakage with FIDO technology, and FIDO authentication that guarantees convenient and high security by expanding to existing authentication fields as well as various authentication fields such as cloud, blockchain and fintech. Technology has created an opportunity to enhance the user experience. ”

Regarding the future expectations and prospects for FIDO, Vice President Ahn Gun-sik expects that by 2020, the emphasis on user verification and security will expand the service that enables multi-validation through a third-party trust organization, a Trusted Third Party (TTP). did. Multi-validation not only increases the reliability of the transaction but also reduces the security burden on the service provider by allowing the service provider to perform its own certification and further verify it further objectively through the involvement of a third party. did. TTP has become an indispensable element in creating a more reliable internet world, and emphasized that Korea Electronic Certification will be positioned as TTP’s global best practice through know-how and infrastructure accumulated over 20 years.

In addition, FIDO has started its standards overseas, but is becoming more active in Korea. Based on accumulated technology know-how, FIDO announced plans to develop overseas certification markets in various fields through cooperation with overseas partners in the FIDO global ecosystem. In order to participate in the Singapore Fintech Festival, which will be held from November 11th, the company is planning to discover various partners.

In the meantime, the demonstration booth of the CrossCert at the seminar event was attended by government, public and private organizations, as well as overseas attendees, to explain the cases of FIDO technology and application cases of the IRS Cloud Sign, which were officially adopted as FIDO Alliance best practices. Hearings and hands-on experiences. In addition, the CrossCert demonstrated FIDO2 based certificate issuance and use demonstration that is being promoted as a KISA web leading technology development support task. Especially, the certificate is based on No-Password without installing a separate APP in PC as well as smartphone web browser. Its presentation and use have been well received by the attendees.